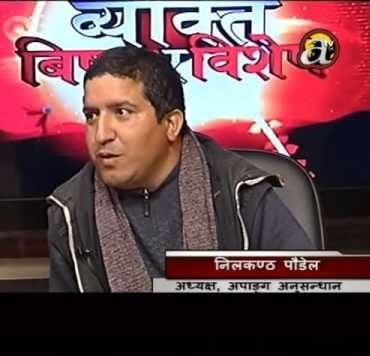 Disability activist Mr. Nilkantha Paudel, Mr. Paudel has disabled himself physically. He is thirty-nine years old and his disability is linked due to polio at a very young age born and raised in a rural village in remote Nepal. He has struggled throughout his life due to this but triumphed over all the setbacks and attained a master's degree in his academic life. He has been persistently advocating for fundamental rights of education healthcare and employment for the disabled community of Nepal. Because of his work and desiccation, Mr. Paudel has been awarded several recognitions inducing the national youth award, and the Asian best Socialist Award, to name a few despite being physically challenged Mr. Paudel is popular also for his determination to work in the social area.

When the conversant on was over, he fell while trying to get up from the chair and walk. While lifting him up, the helper said - When you get up after falling, you get more courage.

He was healthy at birth. After 2 years, his lower back stopped working properly. The government had not delivered polio and other vaccines to the villages.When his mother gave birth, nutrition and vaccinations were not available in the village. She became crippled due to general weakness. He grew up anyway. Due to his deteriorating physical condition, he did not get a chance to walk and play with his friends. During the health checkup, it was confirmed that he was disabled due to polio. When he could understand, he needed the help of Baisakhi. Born in Sainamaina municipality-10 Saljhandi of Rupandehi, Nilakantha Poudel is currently living in Kathmandu. Paudel is looking for success and possibilities by turning disability into strength. Although his whole body did not work, he did not let his confidence melt.

"Disability cannot be avoided, one can easily accept it and move forward with life," he says.  He is the president of the National Center for Research and Development of the Disabled. He is trying to establish all Nepalis with different abilities like him in the society by advancing the organization. "I got the full support of my family and friends in a difficult situation," he said. He has 30 years of experience that nothing is impossible in the society.

He did his primary education at Saljhandi Pvt Fachkapur in Rupandehi. Studied in Pashupati High School from Class 6 to 8. Did the then SLC Kanti Mavi from Butwal. He enrolled in Siddhartha Gautam Buddha Campus in Butwal in class 11 with management subject and passed the proficiency certificate level.

He passed BBS from New Horizon in Rupandehi. After that, his family moved to Kathmandu. Now living in Chandragiri Municipality-10 Satungal, Poudel is currently working in the social sector.

In Nepal, people with disabilities are seen as having no ability. It is not believed that they can excel in anything. Family and society have moved forward, there are no less than Sang in the society," he said.